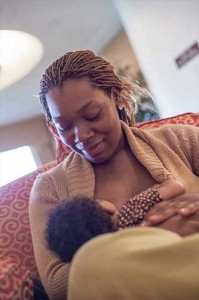 Black Breastfeeding Week was created because for over 40 years there has been a gaping racial disparity in breastfeeding rates. The most recent CDC data show that 75% of white women have ever breastfed versus 58.9% of black women. The fact that racial disparity in initiation and even bigger one for duration has lingered for so long is reason enough to take 7 days to focus on the issue, but here are a few more:

1. The high black infant mortality rate: Black babies are dying at twice the rate (in some place, nearly triple) the rate of white babies. This is a fact. The high infant mortality rate among black infants is mostly to their being disproportionately born too small, too sick or too soon. These babies need the immunities and nutritional benefit of breast milk the most. According to the CDC, increased breastfeeding among black women could decrease infant mortality rates by as much as 50%. So when I say breastfeeding is a life or death matter, this is what I mean. And it is not up for debate or commenting. This is the only reason I have ever needed to do this work, but I will continue with the list anyway.

2. High rates of diet-related disease: When you look at all the health conditions that breast milk—as the most complete “first food,” has been proven to reduce the risks of—African American children have them the most. From upper respiratory infections and Type II diabetes to asthma, Sudden Infant Death Syndrome and childhood obesity—these issues are rampant in our communities. And breast milk is the best preventative medicine nature provides.

3. Lack of diversity in lactation field: Not only are there blatant racial disparities in breastfeeding rates, there is a blatant disparity in breastfeeding leadership as well. It is not debatable that breastfeeding advocacy is white female-led. This is a problem. For one, it unfortunately perpetuates the common misconception that black women don’t breastfeed. It also means that many of the lactation professionals, though well-intentioned, are not culturally competent, sensitive or relevant enough to properly deal with African American moms. This is a week to discuss the lack of diversity among lactation consultants and to change our narrative. A time to highlight, celebrate and showcase the breastfeeding champions in our community who are often invisible. And to make sure that breastfeeding leadership also reflects the same parity we seek among women who breastfeed.

4. Unique cultural barriers among black women: While many of the “booby traps”™ to breastfeeding are universal, Black women also have unique cultural barriers and a complex history connected to breastfeeding. From our role as wet nurses in slavery being forced to breastfeed and nurture our slave owners children often to the detriment of our children, to the lack of mainstream role models and multi-generational support , to our own stereotyping within our community—we have a different dialogue around breastfeeding and it needs special attention.

5. Desert-Like Conditions in Our Communities: Many African American communities are “first food deserts”—it’s a term I coined to describe the desert like conditions in many urban areas I visited where women cannot access support for the best first food-breast milk. It is not fair to ask women, any woman, to breastfeed when she lives in a community that is devoid of support. It is a set up for failure. Please watch this video and educate yourself on the conditions in many vulnerable communities about what you can do (beyond leaving comments on blogs) to help transform these areas from “first food deserts” into First Food Friendly neighborhoods.